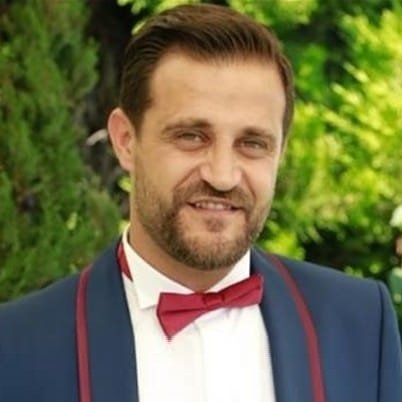 38-year old Charbel was not just a firefighter, he was the Head of Emergency Operations in the department, and he worked along two of his relatives, his nephew, Charbel Hitti, and his brother in law, Najib Hitti.

Charbel, the son of Tanios and Wedad, had three sisters: Sanaa, Hanaa and Wafaa. Charbel loved life and played different sports, including motorcycle riding and car racing. He even organized multiple road races, at his own expense, and won three of them.

Charbel was a great son, a loving brother, an ideal father, and a dedicated leader.

Charbel was married to Karlen Bechara Hitti, and they had two daughters, Angelina (2.5) and Caterina (1).

He completed primary and middle education in Kartaba, then transferred to vocational education, and graduated from CIT-Lebanon with a degree in Accounting. After his graduation, he discovered that the job market does not match his expectations or degree, in terms of petty salaries he would barely survive with. He joined the Beirut Fire Department on April 1, 2009, as a team leader, and attended multiple training workshops with the fire department, the Lebanese army, in addition to French firefighting teams, in Lebanon and France. He was commended six times by Beirut's Fire Chief.

In the last days before his death, he worried about the future, and bought some cattle, to create and extra income opportunity to provide for his daughters, when things get worse.

On August 4, it was like every other duty day for Charbel; he completed his routine tasks, and prepared to meet with Beirut Governor at 9:30 AM. He got busy all afternoon. At 5:52 PM, the fire department operations room received an emergency call about a fire at the Port of Beirut, without further details. Charbel responded with his team, and was shocked by the enormity of the fire. He asked Sahar Fares to call for backup… A few seconds later, warehouse number 12 exploded before they could open its doors… Seconds were enough to wipe out the warehouse and everything around it.

Charbel died in the name of duty… Only his remains were found.

Eleven days later Charbel's father received a call about additional remains belonging to his son… His grave was reopened, cutting further into the family's wounds.