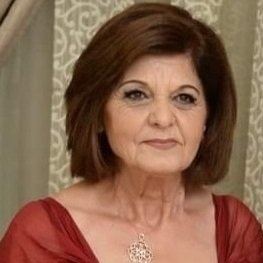 Therese was born in Mrayjat – Chouf, in 1951. She attended Collège Sainte Famile in Zahle and Bhamdoun. She taught in the same school in Haret Hreik when her family moved to Chiah. During that period, she married Salim Antoun and moved with him to Mrayjat.

In 1982, they were displaced and moved to Deir el Kamar, then to Hazmiye to live with her brother. After that, her husband found a job in Amchit, as an insurance broker, and they moved there. A few months later, he was diagnosed with cancer, and died shortly after. Therese didn’t have any children, and returned to Hazmieh to live with her family.

She wanted to be independent, she got a job at Beirut Governmental Hospital -  Karantina, as a doctor's assistant in the dentistry department, as well as other outpatient clinics. When her financial situation stabilized, she rented an apartment close to the hospital.

After her retirement at sixty-four, she still worked as a private home nurse. She was reputable in the domain for being loving, caring, helpful, and generous.

Therese was very proud, she was self-sufficient her whole life, and never needed anyone else.

On August 4, her brother Elias heard about the explosion when he was home in Bhamdoun. Roads to Beirut were blocked, he called his brother who lived in Zouk to check on their sister. Joseph, her other brother, arrived to Karantina, and found Therese dead on the stairs of her house. After the first explosion, Therese ran out to see what happened. The second explosion pushed her to the wall and she lost her life.